The ABCs Of Quality Viewing - InformationWeek

The TV network's site will blow you away in terms of picture quality and the availability of programs.

If quality viewing matters most, ABC.com wins so far. I have never seen such a viewing experience. The picture quality, the availability of programs, the delivery are all off the charts. If you can get used to watching content on a computer screen, this will blow you away. Albert Cheng, executive VP for digital media at Disney ABC Television Group, attributes this to things like carefully tuned encoding and special partners like Move Networks (for more on Move, see "Make It YourTube").

The service began in October 2005 at the iTunes video store with three shows, Cheng said. Then in May 2006, the company launched an ABC.com episode player in partnership with five affiliates and 10 advertisers, and a handful of shows like Lost and Desperate Housewives.

ABC.com went full scale in September 2006 with a bigger slate of prime-time shows (full seasons). There are syndication feeds to sites including Facebook and Hulu. Some 300 million episodes have played on ABC.com since fall 2006. 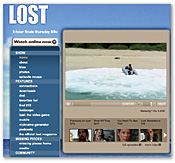 (click image for larger view)
It has to scare the living daylights out of networks like ABC to make its shows available on demand for free, but Cheng said that ABC.com's primary use has been to catch up on missed shows, so there is no cannibalization today. But over time ... well, let's just say the conversation has been had at ABC, and I'm quite sure at every network and entertainment media company, just like was had years ago when publications like the one you are reading first made the move to put its content online. Like others we talked to, Disney/ABC has seen even its high-definition files ripped right over the air and shared peer to peer. Giving content away like this puts ABC back in control. And let's not forget making money. The division's goal: $4 billion in advertising by 2011.