The bot-like Party-shot camera dock uses facial detection technology to snap photos when it determines the time is right. 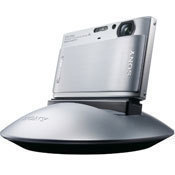 Sony has introduced a digital camera accessory that can follow people in a room and by using facial detection technology, snap photos autonomously.

The cone-shaped camera dock can pan 360 degrees and tilt a camera up to 24 degrees in following people within a room. Using face and smile detection technology embedded in Sony digital cameras, the device takes pictures when it determines the time is right.

Sony is marketing the Party-shot as an "automatic photographer" that would be useful during gatherings of family and friends. "With the Party-shot personal photographer, you no longer have to worry about taking pictures," Shigehiko Nakayama, digital imaging accessories product manager at Sony Electronics, said in a statement.

The Party-shot is powered by two AA batteries, which last up to 11 hours, according to Sony. An AC adaptor is sold separately.

The device will work with Sony's DSC-WX1 and DSC-TX1 Cyber-shot cameras, which are scheduled to be released about the same time as the Party-shot. Both cameras have 10.2-megapixel sensors and three-inch LCD screens.


We welcome your comments on this topic on our social media channels, or [contact us directly] with questions about the site.
Comment  |
Email This  |
Print  |
RSS
More Insights
Webcasts
Defense and Response Against Insider Threats & User Errors
The Pesky Password Problem: Policies That Help You Gain the Upper Hand on the Bad Guys
More Webcasts
White Papers
Exclusive IT Trend Report: Chatbots
5 Key Steps for Assessing Your Security Effectiveness
More White Papers
Reports
Top 10 Security Technology Trends to Watch, 2020
The ROI Of SD-WAN: Not Just A Numbers Game
More Reports