Companies can now run their own, private version of the virtual world in their data centers, for added security and control. 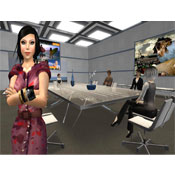 Second Life is attracting a cult following among businesses, who say the virtual world gives them richer collaboration than teleconference calls or video conferences. But Second Life still has limitations that pose barriers to enterprise adoption.

One of the major limitations is that Linden Lab, which developed and operates Second Life, runs the service on its own server farms. This software-as-a-service model creates problems for user control and confidentiality of sensitive conversations.

But Linden Lab is working to change that. The company plans on Wednesday to launch open beta for Second Life Enterprise, a $55,000 hardware appliance that enterprises can install in their data centers. The appliance allows companies to run Second Life on their own networks, behind the company firewall. Linden Lab expects beta to continue through the fourth quarter, and plans to announce general availability by March.

Second Life offers an advantage over conference calls and online conference apps such as Cisco's WebEx, in that it creates the illusion that participants in an event are sharing the same place and time. "What you've got with a virtual environment is that it's completely immersive. There's depth to what we're doing," said Chris Collins, general manager for the enterprise for Linden Lab.

Second Life Enterprise will likely be used by companies that already have a public presence in Second Life, Collins said. "It's like having an Internet Web site and an intranet," he said. The public Second Life grid is useful for public events, but it has difficulties. It suffers occasional outages. Security protections are sometimes tricky to use, which can lead to meetings being disrupted by vandals (called "griefers" in Second Life jargon). And text chat and Second Life's built-in VoIP service go through Linden Lab's servers, which can be a problem for healthcare providers and other industries subject to confidentiality policies.

By running Second Life on company servers, organizations will be able to control downtime and maintenance, control who has access to the server, and store communications behind the firewall.

Second Life went through a hype bubble in 2006-2007, as businesses jumped in to use it for advertising and marketing. The bubble collapsed when businesses figured out that Second Life has, in fact, very few users compared with platforms like Facebook and YouTube -- about 750,000 users with more than one log-in in September -- which made it difficult to use for mass-market publicity.