Personal Medical Tricorder Has Its Eyes On The Prize - InformationWeek

50%
Tweet
Hypochondriacs rejoice: California-based Scanadu has built a smartphone accessory and a smartphone/tablet app that can perform visual examinations and monitor vital signs and then displays them on a smartphone. It looks like a medical tricorder from Star Trek.

The Scanadu Scout, demoed this year at the Consumer Electronics Show (CES) in Las Vegas, scans vital signs such as heart rate, electrical heart activity, blood pressure, temperature, heart rate variability, and blood oxygenation. After holding the bite-sized piece of plastic to a person's temple for 10 seconds (although Laptop Mag claims it takes a minute), the device transmits the information to a smartphone app via Bluetooth. 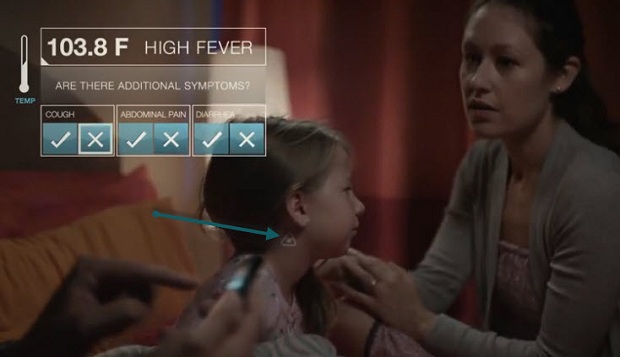 The app does more than simply display the information. It tracks the data over time, allowing people to understand what's normal for their bodies. That, according to the company, is one of the features that lets "users explore the diagnostic abilities of a clinic and conveniently puts them in your smartphone," said Scanadu CEO Walter de Brouwer in a written statement.

The app will be available for iOS, Android and Windows phone.

Although there are a lot of companies making devices that monitor our bodies, journalists herald the device as a commercially available version of the tricorder, a prop from the science fiction Star Trek series because of the way it looks. Also, a marketing video on the homepage suggests that is the company's long-term vision.

According to the company, thermometer, ECG, PPG, and infrared sensors are built in the device. The algorithms, developed by Scanadu, allow all these readings to take place from one point of contact on a patient's body.

The device isn't available yet, pending FDA approval. Since there are other devices similar to Scanadu about to be released to consumers, according to a company spokesman, FDA certification is important because it will assure customers that readings from the device are accurate. The company reports the device will retail for about $150.

Scanadu's CEO says he developed the device for personal reasons, but, the company, formed in May 2011, will likely compete for the $10 million Qualcomm Tricorder X Prize, announced by Qualcomm in October 2012.

The Qualcomm Foundation aims to "help consumers live long and prosper through the [prize]."

"I think it [the prize] is an absolutely brilliant idea," said actress Kate Mulgrew in a statement. Mulgrew is known as Captain Janeway on Star Trek Voyager.

To win the $10 million prize, teams have three and a half years to develop a device that, in three days, will accurately diagnose 15 conditions in 30 people. The winning device will also have to display the information in laymen's terms so that non-professionals can understand it.

We welcome your comments on this topic on our social media channels, or [contact us directly] with questions about the site.
Comment  |
Email This  |
Print  |
RSS
More Insights
Webcasts
DevOps: Innovating with Speed, Security, and Quality
Now That Ransomware Has Gone Nuclear, How Can You Avoid Becoming the Next Victim?
More Webcasts
White Papers
Wired vs. Wireless LAN Solution
2020 State of Malware Report
More White Papers
Reports
Online Threats -- and What Your Org Can Do About Them
[Special Report] Remote Network Management
More Reports

IT Career Paths You May Not Have Considered Lisa Morgan, Freelance Writer,  6/30/2020
White Papers
DevOps for the Database
Wired vs. Wireless LAN Solution
2020 State of Malware Report
The Power of What-If: Using Analytics to Understand Outcomes of Automated Decisions
2020 SANS Remote Workers Poll