Next Office Version To Have Touch Mode - InformationWeek

Just as Windows 8 is preparing to make touch interfaces a natural part of use, Microsoft Office 15 will allow users to move in and out of Touch Mode.

Microsoft watcher Mary Jo Foley on ZDNet reports that Office 15, the next version of Office, will have a "Touch Mode."

The story and screen shots are based on reports from users of the Office 15 Technical Preview. No doubt, Microsoft heard from users that they didn't want to be forced into using a touch interface, and the layout of the screens shown by Foley indicates that Touch is a distinct mode of the program, allowing users to move between it and a conventional keyboard/mouse UI. Foley's source says the button doesn't actually do anything yet.

The first tablets running Windows 8 will likely be on display next week at Mobile World Congress in Barcelona, many of them running on ARM processors. Microsoft President Steve Sinofsky has already said that Windows on ARM "includes desktop versions of the new Microsoft Word, Excel, PowerPoint, and OneNote." These versions have also been optimized to minimize power consumption. 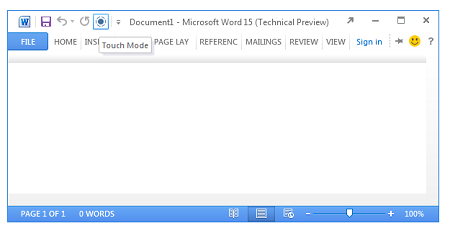 We welcome your comments on this topic on our social media channels, or [contact us directly] with questions about the site.
Comment  |
Email This  |
Print  |
RSS
More Insights
Webcasts
The Failures of Static DLP and How to Protect Against Tomorrow's Email Breaches
Making Cybersecurity Work in Small and Medium-Sized Businesses
More Webcasts
White Papers
Two-Factor Evaluation Guide
Threat Intelligence Solutions: A SANS Review of Anomali ThreatStream
More White Papers
Reports
The Malware Threat Landscape
Are Unprotected Cloud Databases Leaking Your Data?
More Reports