While providers see a trend toward getting video on mobile handsets, there are still some speed bumps.

Phone, cable, and content companies see the trend toward time-, place-, and device-shifting content, and a key piece to that is delivering video to the mobile handset. The barriers, while many, are quickly coming down.

Bandwidth is still a challenge, although 3G coverage is getting better and we have yet to saturate those networks; meanwhile, 4G technologies like Long Term Evolution (LTE) and WiMax are coming on like freight trains.

Those who make the content have two challenges. First, where and when to make the content available on mobile devices, the answer to which generally hovers around finding an appropriate business model; and second, how to create content that is well suited to small screens. At last year's 3GSM conference in Barcelona, Spain, several award-winning short-film directors (funded by Robert Redford's Sundance organization) told me how challenging the task initially was -- some of them created their art using what they ultimately decided were misguided perceptions of what would work. Fine details and color weren't challenges, surprisingly, but the time people will spend with mobile devices might be (though I watched one guy on an airplane watch four straight hours of movies on his iPhone). 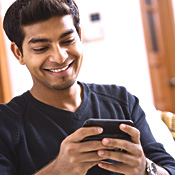 There's also a publishing challenge, and that's where companies like MobiTV come in. MobiTV, according to CTO Kay Johansson, is an end-to-end service for streaming video to mobile devices. It's typically done as a service for carriers to extend their offerings, and it includes the client-side application, transcoding, and on-demand content management. It also does rate-shaping, looking at the network and changing the way it distributes video depending on network behavior. It can switch to a lower bit rate, for example. MobiTV accomplishes this using its own interpretation of data from protocols like RTP.

Johansson believes that the personal nature of the mobile device offers a huge opportunity for more targeted ad opportunities. For now, people are 'snacking' on this content in the United States, primarily for sports, news, cartoons, and music. I've subscribed to Cingular's video service for over a year, and it has yet to make anything worth going beyond a mere snack.