50%
Tweet
OneNote Mobile offers a nice alternative to sync-to-cloud note-taking apps such as EverNote and Springpad. You can edit notes containing rich text, and sync with mobile devices via SkyDrive and the OneNote Web App.

Microsoft's OneNote has made the move to the mobile and cloud space in a big way over the past year. There are now versions for Android, iPad, iPhone, and, of course, Microsoft's own Windows Phone. All of these OneNote mobile versions can sync to Microsoft's free cloud storage service SkyDrive, where there is a Web version of the application. Here's a quick look at these OneNote mobile versions and the hints that Microsoft might be giving us about Microsoft Office for iPad and Windows On Arm (WOA). 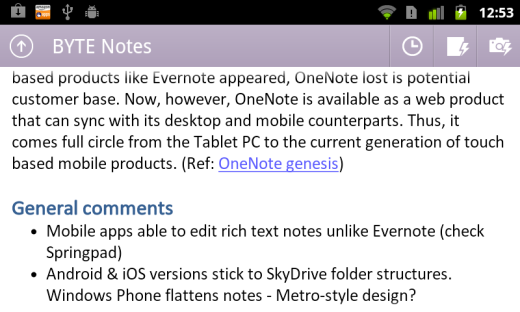 OneNote Mobile for Android is capable of retaining header and hyperlink formatting, unlike OneNote for iOS.

OneNote was originally designed back in 2001 for tablets with styluses. After tablet PCs became vertical-market products OneNote's appeal quickly became limited. When cloud-based products such as Evernote appeared, OneNote lost a potential new customer base. Now, however, OneNote is available as a Web product that can sync with its desktop version and the current generation of touch-based mobile products.

All of the OneNote mobile apps require a Microsoft Live ID. This is used to sync notes with OneNote Web App, which is a part of Microsoft's SkyDrive cloud storage service. Each SkyDrive account offers 25GB of storage. However, the free versions of the OneNote app are limited to 500 notes. You can eliminate this limit by upgrading the app. Until as recently as December 2011, the upgrade price for the Android and iOS apps was the same: $4.99. Now the iOS upgrade costs $14.99. This price increase might be an indication of what Microsoft plans to price other Microsoft Office components for iOS when and if they become available. It might also give us an idea of what Microsoft Office for WOA will cost.

OneNote Mobile for Android can't format text with boldface, italics, or header styles. However, it will display formatted text that was created with OneNote for the desktop, OneNote Web App, or OneNote for Windows Phone. One of the advantages of OneNote over EverNote is that OneNote documents with rich text can be edited by all the mobile app versions. (EverNote can append to a note with rich text, but it can't edit rich text.)

OneNote for the iPhone and iPad
There are separate versions of OneNote Mobile for iPhone and iPad. However, except for different layouts for the two screen sizes, the apps are identical. 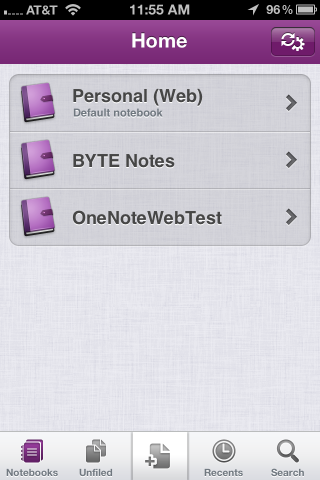 Comment  |
Email This  |
Print  |
RSS
More Insights
Webcasts
5 Steps to Integrate SAST into the DevSecOps Pipeline
Are You Ready for When Cyber Attackers Get In?
More Webcasts
White Papers
Simplify Your App Security
[IT Trend Report] The Future of Cloud
More White Papers
Reports
Can You Spare 10-12 Mins to Help Us Out with a Survey on Tech Trends?
Got 7 Minutes? Dark Reading Needs Your Help With Our Survey on Incident Response
More Reports