50%
Tweet
iPad users, rejoice. Microsoft Office is finally available for the iPad. It's buggy in places and browsers aren't made to handle huge spreadsheets, but overall, Microsoft's Office Web Apps for iPad, including Web-based versions of Word, Excel, and PowerPoint, rocks.

Ask people which productivity app they would most like to have on their iPad, and most would probably say Microsoft Word, followed by Microsoft Excel. In other words, Microsoft Office. This week, after nearly a year of rumors of Microsoft Office for the iPad, Microsoft finally delivered. A touch-friendly version of Office Web Apps is now available.

To access the apps, head over to http://skydrive.com, which will redirect you to skydrive.live.com. Assuming you have a Microsoft Live account and have opted in to the SkyDrive service, you will see a tiled set of images representing your SkyDrive cloud storage contents. I opted to view my files and folders in a traditional detailed list view, seen in the screenshot below. 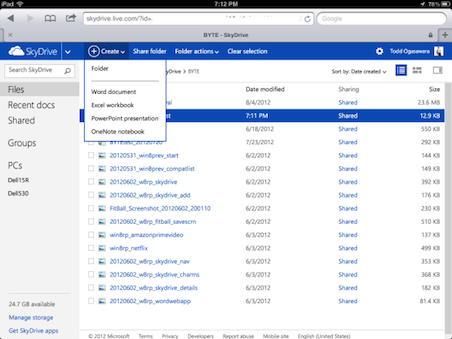 The first thing I did was create a new Microsoft Word document (below). If you have used Microsoft Office Web Apps in your desktop browser, you'll find that the look of these refreshed Web apps matches that of the flatter graphical look of the upcoming Microsoft Office 2013 release for desktops. At the same time icons and menu items are spaced for touch friendliness.

Beware there is still one huge difference between Microsoft Office Web Apps and Google Docs: Google Docs saves data in your documents as you work. Microsoft Office Web Apps, whether used on the desktop or iPad, require manual saves. One effect of this difference is that it can take what seems like a long time--more than a few seconds--to open and save documents. The good news is that as long as you have a network connection, Office Web Apps will prompt you before exiting if you have not saved a modified document. 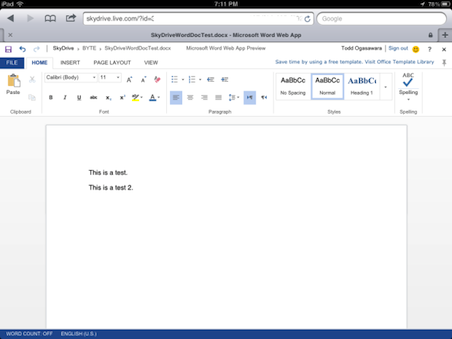 The Microsoft Excel Web app (below) is hands down the best Web-based spreadsheet available for the iPad. It is much better than the Google Drive (formerly Docs) spreadsheet for one simple reason: You can move from cell to cell and row to row just as you do in the desktop version. It does not have Google Drive's terrible single-row editing. 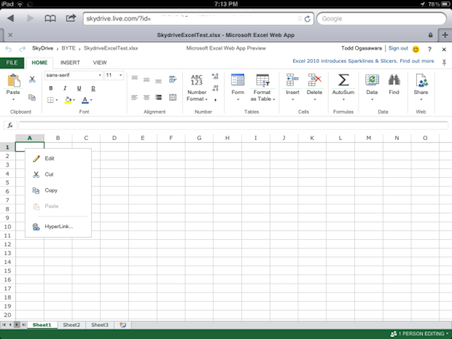 This Web-based Office solution is not, however, perfect. Large Word documents or Excel spreadsheets are almost unmanageable when used on the iPad in the Safari mobile browser. To be fair, this is also the case when using Internet Explorer on a desktop or notebook computer. A Web browser is simply not yet the optimum vehicle for heavy work. The spreadsheet in the screenshot below contains several thousand rows consisting of numbers and text. Attempting to move around the spreadsheet was an exercise in futility. 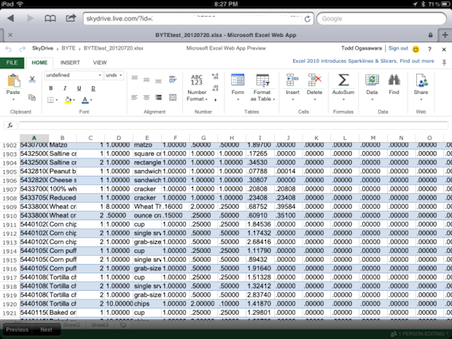 PowerPoint in Office Web Apps was the most problematic of the big three Office components. (I did not test OneNote because Microsoft has had a native iPad app for some time.) Editing title boxes was difficult and the entire Safari browser crashed at one point. I also encountered a vague error message (see below). 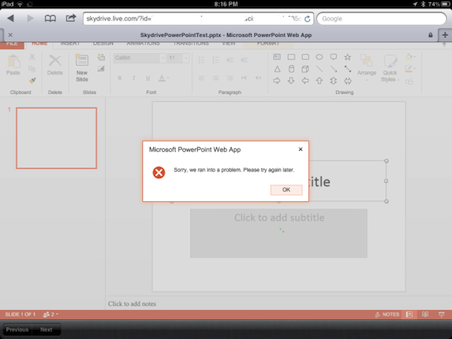 Eventually, however, I was able to edit, save, and reopen for viewing a slidedeck (below) created with the PowerPoint Web app. 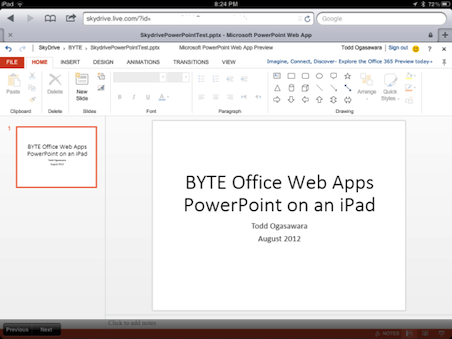 It's important to remember that these Office apps are accessed over the Internet so naturally they require a network connection. Don't expect to use them in a meeting where you don't have access to Wi-Fi or a 3G/4G cellular network. Despite this limitation and the problem with big documents, Microsoft Office Web Apps for the iPad is a game changer. It finally brings Microsoft Office to the iPad, including the first useable Web-based spreadsheet. When your documents are big, you can copy them from SkyDrive to a PC or Mac and use the full desktop Microsoft Office applications for more demanding formatting or calculation work.

We welcome your comments on this topic on our social media channels, or [contact us directly] with questions about the site.
Comment  |
Email This  |
Print  |
RSS
More Insights
Webcasts
5 Steps to Integrate SAST into the DevSecOps Pipeline
Cloud Security Threats Enterprises Need to Watch
More Webcasts
White Papers
NetFlow vs Packet Data
[Exclusive InformationWeek IT Trend Report] The Cloud Gets Ready for the 20's
More White Papers
Reports
Can You Spare 10-12 Mins to Help Us Out with a Survey on Tech Trends?
Got 7 Minutes? Dark Reading Needs Your Help With Our Survey on Incident Response
More Reports