50%
Tweet
OmniGraffle is a useful diagramming tool with most industry standard features for a fraction of the price. Portability and intuitive use make it an attractive way to start working on any project. But, in order to create complex diagrams the desktop version is a must.

OmniGraffle by The Omni Group is a Microsoft Visio competitor that offers professional diagramming for OS X and the iPad. The app comes in two versions: desktop and mobile. The desktop version works with OS X 10.5+; the mobile version is for iOS on Macs and iPads. The Mac app offers more features, a higher price tag, and a professional version that adds Visio compatibility. OmniGraffle for the iPad, which I review here, has fewer features--but boasts a user experience that's closer to pen and paper diagramming and sketching. 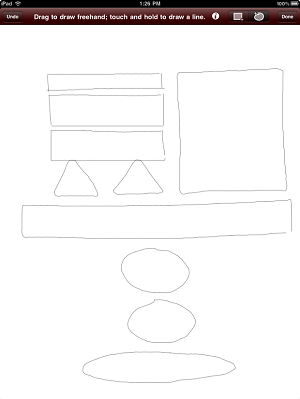 For relatively simple diagrams, OmniGraffle for iPad shines. It's not as precise as a Wacom tablet, but it's pretty good.
The Omni Group designed the app for iPad ($49.99 at the Apple App Store) from the ground up. According to Molly Reed, VP of operations, the company used gesture recognition, the UI Kit, Foundation Kit, and Objective C to get the most out of what the iPad can offer.

For relatively simple diagrams, OmniGraffle for iPad shines. Navigation makes use of all of the iPad's touchscreen capabilities--the pinch-zoom, finger slides, pokes, and canvas rotation. The freehand tool is one step closer to a tactile painting experience on a computer screen. It operates like Adobe Photoshop's paint tools on a laptop touchpad, but with a large work surface. It's not as precise as a Wacom tablet, but it's pretty good.

Freehand shapes can be manipulated with more precise diagramming and with gestures as well as normal inputs. And it's possible to draw lines connect to shapes, connect shapes, and automatically lay out an entire project.

Styling options include built-in themes as well as custom color support for HSB, GRB, and grayscale. Color options also include blending up to three colors, transparent shadows, and a range of line thickness and dashing options. It's also possible to select an entire class of objects--for example, all purple rectangles--and make bulk changes to styles. Text options include text wrapping and styling, as well as tables with individually customizable cells. 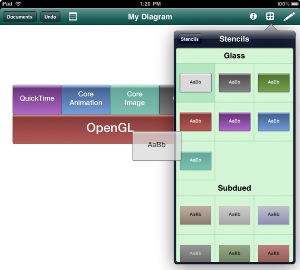 OmniGraffle supports stencils, which are templates that include customized objects such as shapes, user interfaces, logos, network diagrams, scientific processes, and much more.

The second issue I had was its inability to work with complex diagrams. But, that's not something The OmniGroup can solve--OmniGraffle gets clunky because the iPad's hardware isn't always up to the task. Faster iPads will presumably mean complex diagramming.

One of the features I thought most interesting was stencils. Stencils are templates that include customized objects such as shapes, user interfaces, logos, network diagrams, scientific processes, and much more. That's pretty standard, but if you're connected to the Internet, the app can access Graffletopia, a user-generated collection of over 500 stencils--everything from standard iPhone GUIs and film and television production templates to scientific instruments and large-scale networks. For example, Reed has "laid out knitting patterns with OmniGraffle."

OmniGraffle has two disadvantages compared with Microsoft Visio. First, it's unable to work with interactive diagrams. It can't drill down into pivot diagrams from Excel, Access, or other data sources. Something like that exists in the Pro version for desktop, but only connects with The OmniGroup's project management software and is not designed to include the level of data normally found in Excel and its peers.

Sharing isn't a strong point, either. It can export PDF, high-quality images, email, and print documents. But it can't import or export Visio documents unless you buy the $199 professional desktop version. Also, cloud compatibility is limited to iDisk and WebDav. The company doesn't at present have plans to include other cloud services. 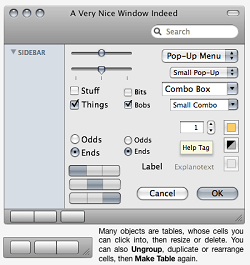 These customized OS X objects are just one example of what you can do with an OmniGraffle stencil.

Omni Group's future plans for OmniGraffle include document syncing with a new document browser and coordinated access to documents. Automated document synching is also in the works for this year. Beyond that, the company wants to work on incorporating interactive elements and content.

OmniGraffle is a useful diagramming tool that offers most industry-standard features for a fraction of the price. Its portability and friendly interface make it an attractive way to start working on any project. But in order to create complex diagrams you have to shell out another $199 for the desktop version.

Price: $49.99
Pro: Con:
We welcome your comments on this topic on our social media channels, or [contact us directly] with questions about the site.
Comment  |
Email This  |
Print  |
RSS
More Insights
Webcasts
DevOps: Innovating with Speed, Security, and Quality
Now That Ransomware Has Gone Nuclear, How Can You Avoid Becoming the Next Victim?
More Webcasts
White Papers
DevOps for the Database
2020 State of Malware Report
More White Papers
Reports
Online Threats -- and What Your Org Can Do About Them
[Special Report] Remote Network Management
More Reports