It can be hard to take thorough notes, and a recording of an event is hard to scan. Here are three apps that try to provide a good compromise--they synchronize the notes you take with the audio being recorded at the time.

Audio recordings of long meetings and classes are only marginally useful. Wouldn't it be nice if you could listen just to the parts related to specific sections of your written notes? It turns out there's an app for that. In fact, in this mini-roundup I review three iPad apps that promise to make taking and using notes a lot less painful than it used to be.

I've been using AudioNote and SoundNote for the last year. I recently received a free review copy of Audiolio. All three apps do a good job of synchronizing audio recordings with text. Sound quality is not great--but you can blame the iPad's microphone and the difficulty most of us have getting it close to speakers for that. AudioNote provides the best mix of an intuitive graphical interface, useful features such as words highlighted during playback, and easy exports of your synchronized audio and text. Its only minor shortcoming for Windows users is that it uses CAF--Apple's Core Audio Format--as its export format.

Check out the features table below for an overview, and read on for reviews.

Click here to see an image gallery of Audiolio, AudioNote and SoundNote 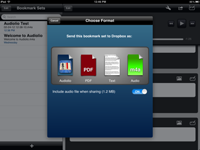 Audiolio lets you save text in its native format for sharing recordings with similarly-equipped users.
Audiolio is the least expensive of the apps at $1.99. It's the only one that does not use a notepad metaphor but it's not hard to learn. The brief tutorial--text with audio, natch--quickly familiarizes new users with the concept of text associated with audio. In Audiolio's case, individual text boxes associated with recorded audio segments are known as bookmarks.

Audiolio offers plenty of ways to disseminate your notes. The MPEG-4 (.MP4) audio files it creates can be played with almost any audio player software including Microsoft's own Windows Media Player and Zune. You can share captured text and audio using email or syncing with iTunes. Audiolio is the only one of the three apps that can send the text and audio files directly to a Dropbox account. Unfortunately, it's also the only one that doesn't let you draw pictures as part of your hand-entered notes.

You can share captured text in one of three formats: plain text, PDF, or Audiolio's own proprietary format. The last option would come in handy for sharing your notes with another Audiolio user. Unfortunately, the plain text option stores what you wrote as one long string of text. 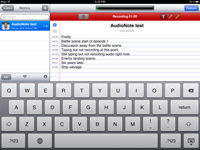 AudioNote's pause button lets you pause an audio recording while you keep typing your own notes.
AudioNote uses familiar ruled notebook paper as its visual metaphor. A timestamp lets you know how much time has elapsed since a recording began. AudioNote is the only one of the apps that highlights the word most closely associated in time with the audio being played back. Conversely, tapping any word moves to audio most closely synced to the position. Having both these options lets you easily move around both the text and audio recording.

The status bar at the top changes from gray to red when the app is recording audio at the same time it's recording your typing. A nearby button conveniently lets you pause the audio recording while you continue to type or draw. You can include a line drawing by tapping the pencil icon on the right side of the status bar.

AudioNote can export text and audio via email, iTunes file sharing, or Wi-Fi. Typed text can be exported into a plain text file or a PDF. AudioNote saves audio files in Apple's Core Audio File (CAF) format--that means Windows users will need to install Apple QuickTime or some other media player that can play CAF files to listen to them. A version of AudioNote for Macs is also available--but you can't share notes between your Mac and iPad AudioNote apps, unfortunately. 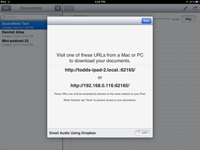 Like AudioNote, Soundnote lets you share your audio recordings over Wi-Fi.
SoundNote has a notepad look similar to AudioNote's. Like AudioNote, tapping a piece of text moves to the nearest synchronized audio. However, SoundNote does not show a timestamp or highlight the nearest text to the audio being played back the way AudioNote does.

Sharing is limited to email and Wi-Fi. However, when you email your document, SoundNote does give you the nice option of sending just the visual part, or a combination of text with audio. Like AudioNote, SoundNote can export to text or PDF. But it saves audio in the MPEG-4 format, not CAF, so Windows users don't have to install any extra software to listen.

On the downside, SoundNote's audio export scheme is not as cohesive as Audiolio's or AudioNote's. If audio was recorded in segments in a single note, the audio is split into multiple files. If your recording session contains lots of pauses, dealing with all the individual files could be a pain.

All three of these apps would be much more valuable if there were an easy way to use the files on a desktop PC or Mac. For instance, I'd like to be able to use my iPad at a meeting, then transport the recording to my Mac for listening to the audio while cutting and pasting from the notes into other apps.

But what they do is valuable enough for iPad users even without this capability. Professionals, students, journalists, and anyone else who needs an easier way to record and play back meetings or events will find one of these apps very handy.

We welcome your comments on this topic on our social media channels, or [contact us directly] with questions about the site.
Comment  |
Email This  |
Print  |
RSS
More Insights
Webcasts
Securing and Monitoring Networks in the 'New Normal'
Building the SOC of the Future: Next-Generation Security Operations
More Webcasts
White Papers
The Network for Whatever's Next; A CxO Guide
The Essential Guide to Securing Remote Access
More White Papers
Reports
Evolution of Ransomware Gangs
IDC FutureScape: Worldwide Digital Transformation Predictions
More Reports