Infor cranks out new user interfaces and social and cloud options for its enterprise apps to take on SAP, Oracle and Microsoft.

One by one, at Infor's annual Informum conference in Orlando, Fla., CEO Charles Phillips on Monday flashed screen shots and offered quick critiques of the look and feel of competing enterprise applications.

SAP? "This order form was probably designed in the 1980s and it's been there ever since -- not very pleasing to use," said Philips. Oracle PeopleSoft? "Very crowded screen; looks like a 1995 website." Microsoft Dynamics? "Pretty much everything in Microsoft looks like an Excel spreadsheet." JD Edwards World? "I'm not even sure what that is -- looks like DOS." Workday? "A more recent company, but they designed their UI seven years ago; it's hard to read with small text and not a good layout."

"The bottom line," said Phillips, "is that enterprise software sucks."

Some of Infor's ERP systems are as old or older than the apps Phillips critiqued, but he was getting to those slick new "SoHo" interfaces, just one example of some $500 million in investments he said the company is putting into revitalizing the portfolio. Other investments announced here included additional industry-specific functionality, a new Ming.le social interface and new cloud-deployment options supported by IBM and Amazon Web Services.

Infor didn't make any fresh claims about market share gains, but Phillips said the company is intent on ending the SAP-Oracle "duopoly."

"We think the way the applications look and behave and the experience with those applications will be a deciding factor for the next generation of users, whether they'll use these applications and who you'll be able to hire," Phillips said. 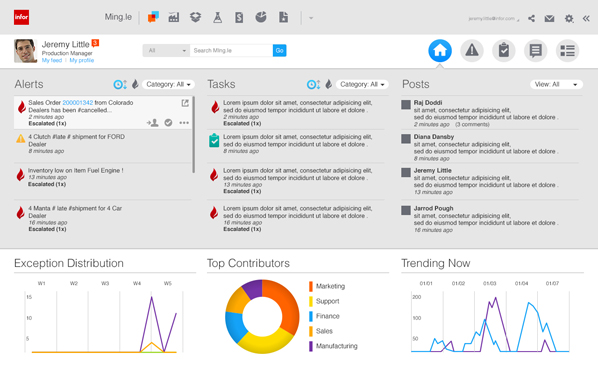 The SoHo app interfaces include cross-application business intelligence dashboards, key performance indicators (KPIs) and report screens with clean-looking layouts, lots of white space and rich data visualizations. Hook & Loop VP Marc Scibelli, one of the design gurus, flashed a gaming interface that helped inspire a new sales-performance dashboard. He also insisted the modern interfaces don't amount to "lipstick on a pig" because his team is actually talking to users about how they interact with the applications, and in many cases we're asking for new fields and functionality to match the linear flow of how work gets done.

"Before everybody had to go into SyteLine for inventory lookups, ION for approving requisitions and email to look at all the back-and-forth communications about requests, but now it's all in Ming.le," said Rains in an interview with InformationWeek.

Think of Ming.le as Twitter meets knowledge discovery, enterprise apps, business workflows and data, as you can learn who else is subscribing to and posting comments about the things you care about.