50%
Tweet
Google tries to stay ahead of Apple and other competitors using impressive 3-D Google Earth imagery and offline Google Maps for Android.

Google on Wednesday launched a preemptive strike on Apple when it announced the imminent arrival of vivid 3-D imagery in Google Earth and offline Google Maps for Android, just days before Apple is expected to reveal map technology to replace Google Maps as the default map app on iOS devices. 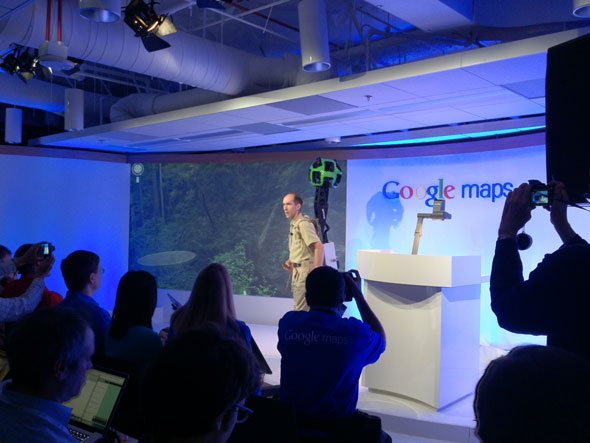 Google Maps has been one of most important apps on iOS devices since the iPhone first shipped in 2007. But Google's relationship with Apple has soured over the past five years. Apple's co-founder and former CEO Steve Jobs felt betrayed by Google's development of its Android mobile operating system and Apple has spent the past few years buying up map technology companies in preparation for a divorce from Google Maps.

The ability to use Google Maps for Android offline--coming in the next few weeks, Google says, addresses a major deficiency in Google Maps on a mobile device. Traveling frequently involves roaming charges on mobile phones and pulling down map data is a sure way to run up one's bill. Soon, Android users will be able to select map sections that can be downloaded onto their devices, so they can be accessed as local files, at various zoom levels, without incurring network costs. Google hasn't said whether it plans to offer Google Maps offline on iOS devices. There may be Apple developer rules that make its difficult or impossible for Google to offer an offline version of Google Maps for iOS.

The history lesson Google presented at its press event, showing how far Google Maps and Google Earth have come and where they're going, served to underscore just how much of a challenge Apple has taken on. Google's map services are used by over a billion monthly users every month. For those keeping score, that's more than the number monthly users on Facebook.

Long infatuated with data as a measure of success, Google offered other statistics: It has 75% of the world mapped using high-res imagery; Google Maps is available in 39 countries, for over 3,000 cities; Google Street View drivers have covered over 5 million miles to create over 20 petabytes of imagery.

Then there's the technology: Google first began adding 3-D building models to Google Earth in 2005. But the models came from multiple sources, so there wasn't a consistent look. Google decided to generate 3-D buildings using automated technology. Initially, this meant extruding building geometry up from structural perimeters. But more recently, Google has improved the process. The company has contracted with a fleet of planes carrying a custom Google-designed camera system that captures oblique imagery from the four cardinal directions, followed by additional overflight passes. Using a process called stereophotogrammetry, Google has been able to extract texture details and map them onto the 3-D geometry of generated buildings.

"It almost looks like a clay model but in this case the model has been sculpted by technology rather than by hands," explained Birch.

"Magical," as it happens, was a term commonly applied by Steve Jobs to Apple's iPhone and iPad, among other products.

To do battle with Apple, Google needs magic, something more than mere processor power and users statistics. It needs to overcome the zealous affection many have for Apple. That's why Google showed a side of Google Maps and Google Earth that people can really love.

Rebecca Moore, engineering manager of Google Maps for Good--a title that invites pondering whether there are Google Maps for Evil--recounted social value of Google Maps and Google Earth. (And we're talking about "social" in the sense of social good rather than over-hyped sense of social networking.) She recounted how Google's work to make maps useful for Hurricane Katrina relief efforts in 2005 earned a rare quantitative measure of social benefit from the U.S. Air Force: "The Air Force told us [after the emergency had passed] that using Google Earth they saved the lives of over 4,000 people."

Steve Jobs may have dismissed Google's "don't be evil" motto, but Google has evidence that its products benefit humanity. It was hard not to imagine Google wearing a white hat when listening to Moore talk about how Google Maps is being used to help with the removal of landmines in conflict zones.

It may be purely coincidental that Apple was criticized for its disinterest in philanthropy under Steve Jobs and that CEO Tim Cook has taken visible steps to improve Apple's image.

Moore said that maps "can unite peoples and nations toward a common good." But they can also divide. China maintains that maps must be approved by the government, to protect its vision of the world. Other countries have similar, if less overt, feelings. For nations, maps are about power and control. And they're not all that different for Google or Apple.

New apps promise to inject social features across entire workflows, raising new problems for IT. In the new, all-digital Social Networking issue of InformationWeek, find out how companies are making social networking part of the way their employees work. Also in this issue: How to better manage your video data. (Free with registration.)