50%
Tweet
A report by research firm Canalys says that revenues in the app business are dominated by game developers. We think the analysis is flawed, but it's also true that revenue opportunities are potentially more plentiful for games than other apps.

According to a recent report by market research firm Canalys, 24 of the top 25 grossing app companies that develop games account for roughly $60 million, or 50 percent of total app revenue in the US.

The study accounts for the companies only — not apps themselves. For example, Rovio, renowned for its Angry Birds app and its focus on that success, has a few game variants on the list of earners that contribute to its appearance amongst other high earners. Other companies, such as Zynga, have 15 titles amongst the top earners. 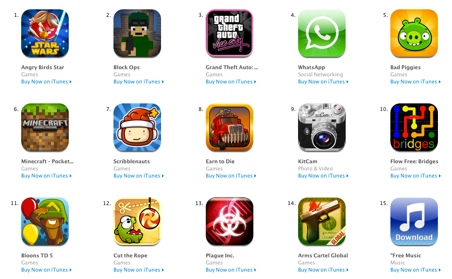 For developers not among the top few dozen, it's clear from the research that marketing is a challenge. The enormous app inventories that Apple and Google boast are, in fact, a problem for developers, not a selling point the way they are for consumers. No matter how good an app is, quality doesn't always get it the attention it deserves, according to Canalysys's findings.

The study also recommends that developers evaluate methods to market and advertise apps, keeping in mind ways to "... exploit social media and social recommendations," as well as other promotions, cross-promotions, and discounts.

The press release is an obvious attention grabber. There's considerably more to the mobile market's landscape than a fast scan of the Canalys release might imply.

To begin with, the study includes both paid-for downloads and in-app purchases, but doesn't separate the two, or rank the companies with that angle in mind. That's an important data point to consider. The freemium business model is gaining traction amongst investors and proving viable. For example, in-app purchases are projected to account for enormous revenues — more than 64 percent of total smartphone app sales revenue by 2015, according to IHS iSuppli.

So what's the split of in-game purchases versus paid downloads? Canalys doesn't tell us the answer, so we're left guessing. But how about the apps that aren't games? I think the growth potential for those apps is limited, and that's why they didn't make it into the study.

I can see in-store sales for certain categories of non-game apps, but not as many. For example, a company that offers travel guides could sell offline features such as maps, reviews, and translator on a region-to-region basis inside an app. There are many such examples, but the sales opportunities are limited, because users of such options are unlikely to buy at more than one region/language. The developer, in the meantime, will probably choose to support only the most popular versions.

Games offer developers the possibility of manufacturing in-app purchases without limits. For instance, there are expansion packs, special attributes for an in-game character, even just cosmetic upgrades. The study doesn't take this into account, or really address the issue. So Canalys's study just looks at the surface, it doesn't dive deeply.

Then there is the question of Pandora. The one company on the list that doesn't make games. It’s obviously bringing cash in the door but the company lost money overall in Q2 2012 — about five million dollars. Its revenue also fluctuates considerably. That leads to the second obvious question: How profitable are the companies on Canalys' list?

I don't know. Some companies on the list are public, like Pandora. But even then it's difficult to determine mobile app profitability for other public companies like Walt Disney, which has many, many divisions and revenue streams. To get an accurate picture how well companies do by mobile apps, it would be necessary to do the study all over again but next time ask the somewhat-obvious question: "What's your profit margin?"

In terms of Pandora, I personally don't use it. The iTunes store helpfully lists Pandora One as the most popular in-app purchase. Pandora One is the company's premium service that includes ad-free listening and better audio quality. But my research suggests that their revenue is split between on air ad sales, online, and subscriptions. I'm left wondering if Pandora gets a cut every time someone buys some of the music the company broadcasts.

In the end the study falls short. It's biased toward games and doesn't give a lot of the other hard-working app developers anything to go on — just that they should start making games. It also leaves lingering questions such as how successful the in-app sales are. And then there's the much more important question: how profitable is making games? After all it's Rovio.com not Rovio.org.

We welcome your comments on this topic on our social media channels, or [contact us directly] with questions about the site.
Comment  |
Email This  |
Print  |
RSS
More Insights
Webcasts
DevOps: Innovating with Speed, Security, and Quality
Securing Active Directory the Way it Deserves
More Webcasts
White Papers
DevOps for the Database
Wired vs. Wireless LAN Solution
More White Papers
Reports
Online Threats -- and What Your Org Can Do About Them
[Special Report] Remote Network Management
More Reports