50%
Tweet
Use your iPhone or Android phone like a disposable cell phone. For cheap you can buy a number (or multiple numbers) with voice time and SMS messages. If person-to-person anonymity is important, this app is for you.

There's an app for pretty much everything these days, and now there's one that will turn a smartphone into a burner phone: i.e. a disposable phone not associated publicly with you. 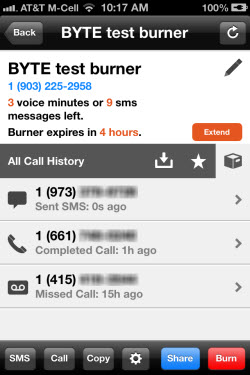 The iPhone Burner app; note the 3rd call in the list has voice mail (click for larger image)
Released Thursday for Android, and aptly named Burner, the app grants the ability to create multiple phone numbers and buy talk time and SMS messages — effectively replicating many of the anonymous advantages of prepaid cell phones, or burners. The twist is that it's done with an app. There's no hardware required.

My testing confirmed that the app does pretty much that: It creates a "software" prepaid phone. After verifying my device's phone number via an SMS message, Burner gave me a choice of several different pricing options for creating a burner, including a free trial.

Once I chose a name for my new phone line, Burner let me pick an area code and then assigned a phone number. It was as simple as that, and a moment later I made my first Burner call.

There is one drawback in the design of the Burner system: When someone calls your Burner number you see that Burner number in the Caller ID. This is useful in that you know it's a call to your Burner, but you don't get to see the number calling you until you go into the Burner app. You won't want to do this while your phone is ringing.

The app's design is clear, straightforward and extremely simple to use and understand. It even includes SMS message history and call logging features, much like I've come to expect from smartphones. I encountered one bug: While trying to buy more credits a spinning wheel appeared that stayed on the screen even after the menu finished loading. I had to reboot my phone to get rid of it. But, other than that the app functioned as advertised. It even includes a voicemail for burner numbers with a standard greeting.

Greg Cohn, founder of Ad Hoc, which makes Burner, described many possible uses for the app, including dating, Craigslist transactions, Twitter posts — things that often require user-to-user anonymity. Burner, according to Cohn, is not meant to take the place of encryption, and the company keeps records of calls and SMS messages, so don't assume you're leaving no traces.

Pricing is credit based. Buying time sounds cheap: 20 minutes of talk with 60 SMS messages is $1.99. Prices go up from there, but max out at 25 credits for $11.99. But using Burner deducts minutes from a cell plan, although SMS messages don't. No one ever said anonymity was free.

Use your iPhone or Android phone like a disposable cell phone. For cheap you can buy a number (or multiple numbers) with voice time and SMS messages. If person-to-person anonymity is important, this app is for you.

Price: App is free. Minutes and numbers rates start at $1.99