Bored with PowerPoint presentations? Suit up that iPad or iPhone with a cloud-powered mobile business intelligence app, and head for tomorrow's Apple TV-equipped conference room.

Many Apple fans know the joy of sharing videos, music, and photos with friends by "Airplaying" them from their iPads and iPhones to an HDTV via an Apple TV box. Now, this phenomenon is starting to show up in corporate board rooms.

What's the first word that pops into your head when you imagine a conference room presentation? That's right: PowerPoint. 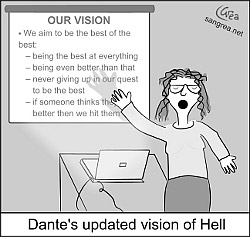 The typical PowerPoint-based meeting goes like this: Janet kicks it off, running through her PowerPoint deck with her laptop tethered to the conference room's video projector. Then Harold transfers the projector's video cable to his laptop and shows his slides; and so on. Or perhaps the presenters get together in advance, and merge their slides into a single PowerPoint deck and pass around one laptop.

That's so late-90s. Change is in the wind thanks to some cool new gear and capabilities from Apple. Right in line with the consumerization of IT, the new approach uses Apple TV, a consumer product, in the board room. MicroStrategy is the first to capitalize on AirPlay for its business apps. But first, a quick tutorial on Apple's AirPlay technology.

What's AirPlay all about?

Basically, AirPlay is an Apple-proprietary protocol for streaming audio, video, and graphics from one device to another. Using AirPlay, an iPad or iPhone running iOS 4.3 or later can wirelessly stream content to an HDTV via an Apple TV box (pictured on the left).

AirPlay currently supports three modes of sending content to the HDTV and its associated sound system using an Apple TV as the receiving device:

Incidentally, the AirPlay mirroring and dual-screen modes are only available when an iPad or iPhone 4S (or later) is being used as the AirPlay source.

Which iOS apps work with AirPlay?
Although not all iOS apps support AirPlay streaming of their video or audio, they all support AirPlay screen-mirroring. That's because once you select an Apple TV as the AirPlay target, the iPad or iPhone screen contents automatically get forwarded to the Apple TV for rendering on HDTV--until you deselect the screen-mirroring option on the source device.

Consequently, you can project the output of virtually any iPad or iPhone app onto the wall of a conference room for sharing. Some of the many possibilities include: